Stabbing Les straddle the boundary of performance art, cover band and unfulfilled aspiration. This fictional band believes that the clearest way to reach an audience is through the work of others. Where audiences go to see virtuosity in performance, Stabbing Les deliver gloriously shambolic failure.

In the same way that the teenager singing into their mirror believes that they are hitting every high note; Stabbing Les put every ounce of passion they have into their work and hope to achieve the level of their heroes. Like the first round contestants of X-factor they fall short massively to the amusement of their judges, but like the masses culled from the talent shows, they fail for us so we the audience do not have too.

This is recorded so we can relive their failure over and over again, and in keeping with this practice the band have a dedicated team of documenters filming and photographing them during their performances.

The First Stabbing Les video will be available on VHS in a limited edition of 25 at the Northern Charter on Friday 5th April. 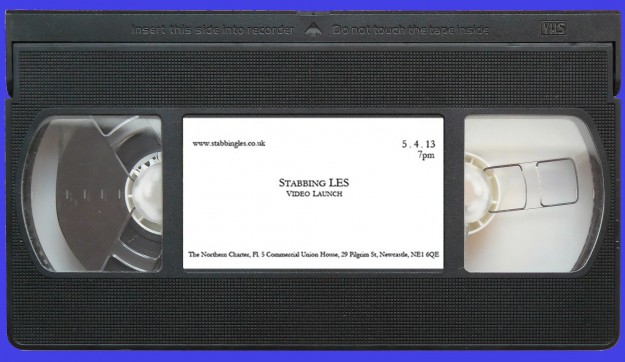